So long, Facebook. It was good while it lasted! Microsoft does the unexpected: Chem4Word

A homage to the nitro group

The nitro group is inarguably the mother of all functional groups. It has character. It is not dull. 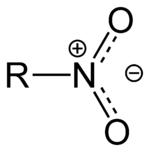 Take a plain organic compound and stick a nitro group to it, and things get just a little more interesting. Lots of cool compounds have nitro groups in them, for a variety of purposes. The notorious sedative flunitrazepam (Rohypnol) has one, the most archetypical explosive TNT has three, but despite its name – nitroglycerin has zero! (Nitroglycerin was originally believed to be a nitro compound, but we now know it is in fact a nitrate, or a nitro ester, if you will.)

Synthesis-wise, we can do lots of marvelous stuff with nitro derivates. Aliphatic nitro groups can be deprotonated in the alpha-position and turned into mighty nucleophiles, and aromatic nitro compounds… aah, there is so much. One reaction that springs to mind: The Bartoli indole synthesis. Check it out if you have not done so before and especially take a good look at the proposed mechanism – it is a beauty.

According to the good old “the more, the merrier” principle, I would like to grab the opportunity and list three obscenely nitrated substances. 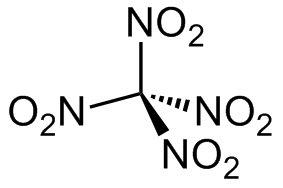 Carbon atoms have four bonds (according to my plastic ball-and-stick model set). Why not connect all four to nitro groups? Sure, no problem. Tetranitromethane has actually been known for over 150 years. It is a liquid at room temperature, and listen to this: Tetranitromethane contains more oxygen per volume than liquid oxygen. When absolutely pure, it is supposedly safe to handle. I have however never met anybody who has ever handled it on a preparative scale. Speaking of preparation, “tetranitromethane can easily be obtained without danger”, if you believe this 1910 article (DOI: 10.1039/CT9109702099). Other than simply blowing up, it has real-life, synthetic applications; look at this reaction for instance:

If anybody knows the mechanism for this transformation – please enlighten me! Oh, another thing, is tetranitromethane an organic compound, strictly speaking? I don’t think it is. It has no C-H bond. 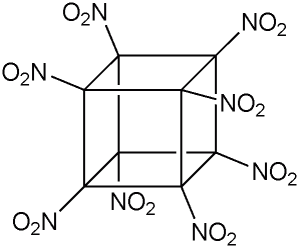 Cubane is the tiniest cube an organic chemist can imagine. Add to it eight nitro groups and we have the angriest, tiniest cube conceivable. Look at the structure – talk about a nano bomb! Can’t you see how unhappy it is? Small samples of octanitrocubane have actually been prepared, and it appears to have 2.7 times more oomph than TNT and it detonates at 10,000 m/s. That is pretty remarkable. 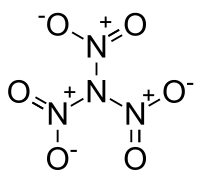 Yes, inorganic chemists call amines amides, which is a tad confusing, but just something we have to live with. That aside, trinitramide was discovered last year by researchers at my old school, The Royal Institute of Technology (DOI: 10.1002/anie.201007047). Actually, the correspondig author Tore Brinck and I have worked together in the past (see here). This remarkable finding attracted quite some attention even in semi-mainstream media, such as this page. If it really turns out to be the next generation rocket-fuel that everyone is hoping for, I can always say I know the guy who discovered it. Cool, huh?

7 Responses to A homage to the nitro group