One step according to SciFinder (updated) In a 200 L reactor…

Alright, so you spent most of the day nailing down a certain reaction, and just in time you found a promising lead in the literature. The only thing left now to be able to run your desired reaction is going through the details. It is then you don’t want any of these.

“Pale yellow” may be somewhat of a bad sign, but in most cases not a deal-breaker. However, purity according to TLC is quite disturbing, especially in the year of 2013.

Has anybody ever seen a better yield after work-up compared to a GC estimated yield on the crude material? Rhetorical question, guys. Yield by GC sucks, and nothing in the world can change that.

3. No experimental details, and a reference to nowhere

Tetrahedron Letters doesn’t have the best of reputations when it comes to experimental details, but contrary to mainstream opinion, I don’t think the journal is entirely shit. Maybe because I happen to have a couple of papers in it 🙂 This example, however, is shit. 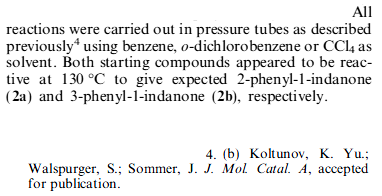 Can you access this figure? Congratulations! You belong to the <.1 % of scholars who can. I had to go to great lengths to lay my hands on this.

Here is a favorite. Patents, especially older ones, are littered with techniques, which I assume few living chemists are able to reproduce today. How about this one, for example?

I’m sure you can name a number of additional annoyances. Hit me hard!