Feeds You think the publication process is slow, huh?

Listen up, kids. If you absolutely must get high, at least do yourself the favor of sticking to good old weed. Grass has been around a while, some 5,000 years or more, and should something go wrong while you puff away, the medical profession and people around you know pretty well how to deal with it. I do not condone criminal activities, but I think we need to be honest with the facts. For example, no one has ever died from a cannabis overdose alone (see Pharmacology & Therapeutics 2002, 95, 127-135. DOI: 10.1016/S0163-7258(02)00252-8). 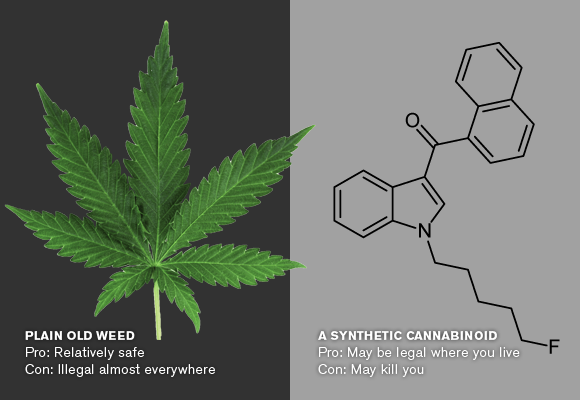 The synthetic cannabinoids, also known as legal highs, that pop up everywhere nowadays freak me out. Many of them turn out to be full agonists of both CB1 and CB2, which are the two major cannabinoid receptors in your brain. These drugs are not safe!

Death rates are climbing. Honestly, who cares if the latest ‘Spice’ is legal where you happen to live, if it is a million times more dangerous to your health – short and long term – compared to marijuana? Speaking of long term effects; we know very little about what these new drugs do to you in the long run, and if the side-effects are reversible. We do not know whether there is permanent damage involved, and we certainly do not have the cure for it.

This crap is sooo not worth it. Your body does not care whether the latest batch is legal or not. Seriously, just avoid.

Allow me to be redundantly clear about one thing: I DO NEITHER SUPPORT CANNABIS USE NOR CANNABIS LEGALIZATION – OK?!

One more thing before I sign off. Don’t be a fool and take this as ‘natural compounds are safer than synthetic compounds’, because that’s plain bullshit. Believers in ‘natural medicine’ should be confronted with: Would you rather take synthetic aspirin or natural strychnine?