Six Degrees of Separation — Charles and I

Most people have probably heard of the idea that everybody is on average six steps away from any other person on Earth, so that a chain of “a friend of a friend” statements can be made to connect any two people in six step or fewer. This is commonly referred to as the theory of Six Degrees of Separation.

I first heard of this in high school in the early ’90s, but must admit that I did not give it much thought then, and I have not since. Other people have, however, including serious researchers in several different fields (more here).

All this changed yesterday, when I discovered that I am indeed connected to Charles Darwin, the Charles Darwin – one of the most prominent people in human history, a kick-ass role model for the scientific method, the scientist of scientists – and that my evidence is rock solid. This is how it happened. Picture first. 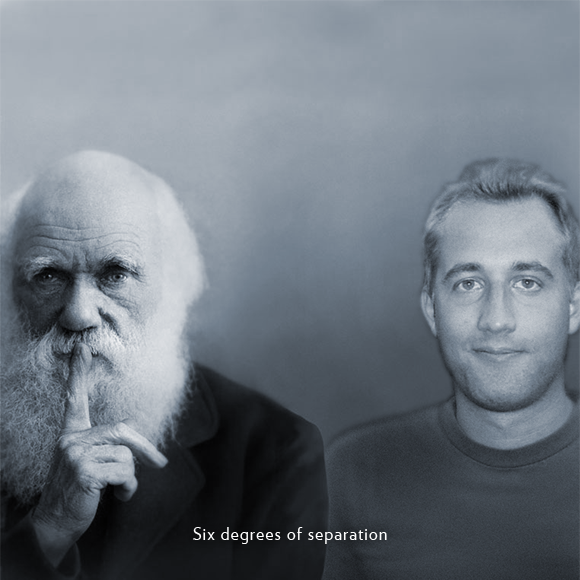 To kill time before I was tired enough to fall asleep last night, I was aimlessly clicking around and reading random Wikipedia articles, when all of the sudden my eyes froze on a very familiar name. My name. Not me personally of course, but my family name, which is, mind you, not very common. Check this out:

The next logical step was of course to find out how the hell Gangolf and I were connected. After a quick glance at our family tree, I learned that Gangolf was my great grand father Helmuth von Kieseritzky’s (1870-1928) oldest brother. In other words, Gangolf was my grand father’s uncle.

My next post is going to be about my connection to Donald Rumsfeld. Not.

P.S. Gangolf von Kieseritzky and his wife Karolina had many children. Their oldest daughter Sophie was for a brief period married to Hermann Hesse – Nobel Prize in Literature 1946 – author of Siddhartha. Respect, yo!

One Response to Six Degrees of Separation — Charles and I