Science bullshit Yield isn’t everything (but here is something)

Oxidations are always exciting, especially on scale. Typically, you choose between toxic metal oxides (chromium, osmium and other nasties), potential high-explosives (IBX, Dess-Martin, organic peroxides and so on) or something based on DMSO (such as Swern), the latter resulting in a “disagreeable odor” – euphemism of the century – as it expels dimethyl sulfide. All these protocols seem to rely on at least one ugly reagent in stoichiometric amounts. Ozone is an interesting alternative, but it is toxic as well hell. 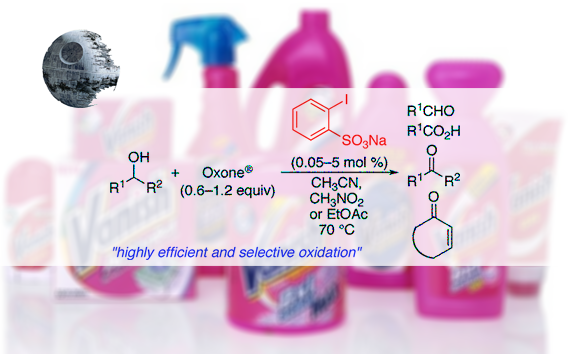 During the past decades, potassium peroxymonosulfate (tradename Oxone) has emerged as an innocent white powder with interesting and oxidizing properties. I suspect that it is one of the main players in “active oxygen” stain removers, which means that you could pick up kilos at the grocery store. On its own, Oxone is indeed able to oxidize a large number of functional groups, but it seems to lack the optimal qualities to perform some precious reactions, such as the oxidation of a secondary alcohol to the ketone. To do this selectively and in high yield, Oxone needs a little assistance.

I occasionally leaf through the literature for new methods. There is, diplomatically speaking, room for improvement in this area. Today the following publication caught my attention. It was a while since I last read a full paper and enjoyed every bit of it. If you are at all into oxidations, I totally recommend this one; beautiful science from beginning to end.

Catalytic amounts, stronger than IBX, in situ generated reactive species, cheap starting materials, suitable for scale-up and a couple of nice graphs. In short, this is the sulfonic acid analog of IBX. I like it! Have you tried it?

Look me up on SciFinder in two years or so to see whether it worked for me. As I work in the industry, my hardcore results can only be communicated through conference reports, patents and publications. The rest – code of silence.

Finally, if you have read this far still wondering where the space station comes in, I am afraid I have to let you down. For the title, I consulted a rhyming dictionary. So what?

P.S. This post is my contribution to the VIII Edition of the Carnival of Chemistry.